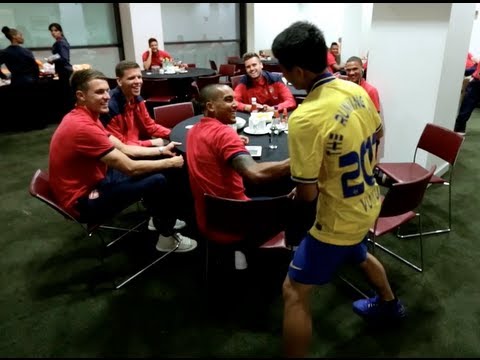 You saw him racing after the Arsenal bus in Hanoi, you saw on the pitch at Emirates, now hear him talk.

This is the Running Man on the whole Running man phenomenon.

Is this the most committed Arsenal fan ever? Or do you know some more passionate?

Subscribe and get all the latest videos from Arsenal on their tour of Asia in 2013.

This is the You Tube channel for Arsenal Football Club during their tour of Asia in July 2013. The likes of Lukas Podolski, Theo Walcott, Wojciech Szczesny, Jack Wilshere, Mikel Arteta, Olivier Giroud are likely to make the trip along with many other first-team stars. The official party will be announced on Arsenal.com.

The group will be taking in Indonesia, Vietnam and Japan during their two-week trip. We’ll bring you news bulletins, features, outtakes and funnies from Arsene Wenger’s squad throughout the visit.